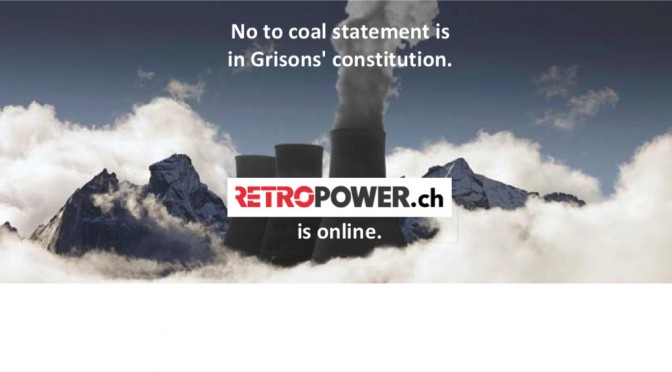 Today, in a second and final vote, Switzerland’s alpine region Grisons approved what has been referred to as the „anti-coal referendum“. Grisons‘ decision stipulates a constitutional amendment banning investments in coal power projects by companies that are co-owned by Grisons, such as Repower. In the southernmost part of the Italian peninsula, Repower’s subsidiary SEI S.p.A. plans the construction of a coal power plant with 1.3 gigawatts capacity. Repower will withdraw from this project before the end of this year — a promise the utility made already in 2013 after voters approved the referendum a first time. Although the result of today’s vote is therefore factually irrelevant, 81% of Grisons voters supported the referendum.

Whether or not Repower’s partner in SEI, Gruppo Hera and Foster Wheeler, will continue the project in Italy after Repower’s  withdrawal remains to be seen.

The outcome of today’s vote prescribes: Grisons may not purchase shares of any company invested in coal power and its government must seek to prevent such investments made by companies in which Grisons is already invested.

Today’s verdict does not resolve any of the problems there are with Repower —in Switzerland or in Italy, where Repower’s business is significant: In Switzerland, Repower’s executives and its board of directors keep rejecting the rise of solar energy and power from wind. In Italy SEI/Repower keeps applying dubious methods including scare tactics and manipulation of the media.

Today’s vote marks the end of a long period of self-restraint by those (non-Grisons) climate activists who, starting in 2009, reanimated the campaign in Grisons to stop Repower’s plan to build coal power plants in Germany* and Italy with a combined capacity of more than 3 gigawatts. At that time the political parties and the environmental organizations had no longer believed that Repower could be stopped. Nevertheless, they have taken home a great victory today!

With the closing of the ballot boxes, retropower.ch went online. It will be extended to report about the Swiss energy sector and document Repower’s various wrongdoings.

* Repower withdrew from the project in Brunsbüttel, Germany, in 2012. The project was cancelled the same year.